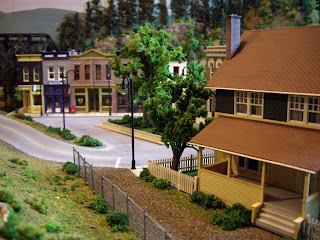 Constructing the main town site of my layout was my next major scenery project. It consists of my Walther’s Merchant’s Row II, DPM Other Corner Café, and Kate’s Colonial Home kits; all set around the circular main street, with my Walther’s White Castle Restaurant kit overlooking the scene from up the street. The amount of actual buildings is quite limited due to the terrain and size limitations of my layout, but the few buildings I do have for my town scene do give a good representation of a full-sized urban town. It was also this space limitation that determined the town’s circular layout.

The town site sits on an area that I had previously allocated for a small pond, but I decided early into my layout’s construction that building a town site would be a better utilization of the space. The pond will just have to wait for another layout. I had also already previously planned the overall layout of the town site, including the street, sidewalk, and building locations, so all I needed to do at this point was start laying down scenery.

I had previously used Woodland Scenics Smooth-it to create a large, flat area to which the town would sit upon. After sanding and painting the entire area the same gray colour as my roads, I made paper templates which represented the footprint of each building. The templates helped me ensure each building would have a good fit around the small, circular roadway, as well as the overal downtown plan.  The painted and weathered styrene sidewalk I had built was also glued down at this point using construction adhesive.

My Walther’s White Castle Restaurant kit is located just up the road from the downtown area, situated at the corner of one of the two t-intersections on my layout. I decided to have a gravel parking lot for the restaurant, so I started by lying down and leveling sifted dirt, and cementing it down with isopropyl alcohol and thinned white glue, applied gently with a small pipette. After drying for a day, I applied blended turf to define the median between the shoulder of the road and the parking lot. I used a paper mask to prevent the turf from drifting onto the main parking lot (as seen above, bottom right).

Finding model chain link fences in my area was proving to be difficult, so I turned to the internet to see if I could make my own. After finding several helpful articles, I easily made my own simple fences using brass rods and tulle I purchased at a local fabric store. I started by drawing a scale 6’ tall chain link fence template on a small scrap piece of wood. I then cut .81mm brass rod into the required lengths of each fence post, and taped them directly over the template with masking tape. A full 12” brass rod was used as the main rail along the top, and a 12” length of music wire was used as the bottom support rail.

I used my soldering iron to carefully solder the support rails to the posts. A bit of sanding might be required after making the solder joints, as the solder can leave a large, unrealistic joint. The next step was to lay the tulle over the backside of the fence’s frame with superglue. I found that superglue worked the best to attach the tulle material to the brass rod. Once the glue had fully dried, I used flat-head trimmers to gently trim the access tulle from the frame.

Painting the fence was next. For this, I used metallic gray acrylic paint, ensuring all of the brass rod and tulle material was fully coated. After bending the fence to the appropriate angle, I used super glue to fasten it to my layout. I had a little trouble with this particular installation as the terrain wasn’t level, so I had to bend the fence on its horizontal access, which caused the tulle material to bind in some spots. Many of the small defects in the tulle (that were caused from bending the fence), were easily covered and hidden with shrubs that I added after installing the fence.

The center median and sidewalk for my downtown scene were completely built from scratch using bulk styrene. The sidewalk was built to match the existing sidewalk that was included in my Merchant’s Row II kit, so determining sizing and spacing was quite straight forward. I used a dull hobby knife and metal straight edge to etch the concrete expansion joints into the styrene, and painted everything light aircraft gray. The median features a center-raised green space, topped with bushes and a large deciduous tree. I started by gluing the tree to the inside base of the median, and then filled the median with fine sifted dirt. After cementing the dirt in place with thinned white glue, I topped the dirt filler with blended green turf, and various shrubberies.

All of the street lamps were purchased off of eBay, and run off of 12v DC. I did add a 100ohm resistor to each lamp however, as running them at 12 volts seemed a bit too bright. To install the lamp posts, I simply drilled a 1/8” hole into the layout, and ran the street light’s leads through to the underside of my layout. The lamp posts were a bit too loose in the 1/8” holes, so I solved this by wrapping a small piece of electrical tape around the underside of the base that fit into the hole. This made everything nice and snug. All of the buildings were also installed by this point and electrical connections were made for lights to leads that run to the underside of the layout. None of the buildings are fastened to the layout, which makes removal much easier if work is required on any of them in the future.

The final details I added to my downtown scene were accessories from a Walther’s City Accessory kit. I carefully painted each accessory and placed them where necessary along the sidewalks, attaching them with superglue (which came in especially useful when installing the tiny parking meters). The original blue US Postal Service mail boxes were painted red to represent Canada Post mail boxes, and include hand-cut white Canada Post logos.

I obviously still need to add the ‘final’ details to my downtown scene to fully complete it, which would be people and vehicles, but that is something that will be completed in the near future. My town, as well as the streets and the overall railroad, still disappointingly need to be named too, so if you have any good ideas, please send them my way!