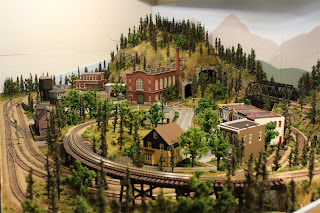 I find it quite amazing how fast things sometimes come together. I’ve been working on this project for just under 3 years, and even though it’s a ways from being complete, it’s definitely now past the 90% mark. While building a project like this, you constantly wonder what the final result will be. You meticulously plan everything out, trying to achieve a certain look and feel, and even though you have a good idea of the direction you’re heading, you never quite know exactly how everything is going to come together in the end. This is especially true if it’s your first go at building a layout.

Then it happens; that most exhilarating part of model railroading that so many modelers talk about – the part when everything all of a sudden comes together. And what a grand and epic moment it is. After all of those long evenings planning, painting, plastering, sanding, nailing, wiring, cutting, and gluing, you finally get to see the results of your efforts. I reached this point with my layout just last week.

I had previously posted about completing my main-street town scene which took up almost one full half of my layout, so here I will cover the second half of the layout, which includes the turn table and represents more of an industrial setting. The first steps I took here were to prepare my layout for the building structures. I used plaster to build a parking lot behind the turn table which my Cutting Scissor’s Co. and scratch-built garage buildings would sit on. After sanding and leveling the plaster, I painted it with the same coloured paint I used on my roads.

My Pioneer Press (Northern Light & Power Kit) is to sit upon a gravel lot, so I used sifted sand and applied it directly to the plywood base using diluted white glue. At the same time, I also started the process of adding the same sifted sand to the turn table area and track. I ended up having to lay the sand down quite thick in this area to make it almost level with the tracks. I used a pipette to first wet the sand with isopropyl alcohol, then used a second to apply diluted white glue. After drying over night, I noticed that some large cracks had developed in the sand. This required reapplying more sand to fill in the cracks and sealing with white glue.

Before positioning the structures on the layout, I drilled holes through the benchwork for the power leads to pass through for lighting. At the same time I also drilled holes and installed the remainder of the street lights along the roadways. I then carefully positioned each building onto its intended position. The leads to both the buildings and street lights were then wired to the rest of the electrical system beneath the benchwork.

Fencing was added next. I used a section of fence from an Atlas White Picket Fence kit that I painted brown in front of the Pioneer Press building. For the turntable yard, I surrounded it with custom built chain link fencing (explained in my Layout Scenery Part III – Downtown post). The rest of my structures were added at this point, including the signal tower, water tower, freight station, and 2 small shed structures made from spare pieces.

The switch machine controlling the turnout into my turntable has been an eyesore since it was first installed. I wasn’t able to install an under-table machine here like I did on my other turnouts, so now I had to find a way to cover the mechanism. To do this, I built a small platform out of styrene, which I then painted and weathered to look like concrete. I then added small railings made of brass rod. The platform then sits on top of the switch machine, conveniently hiding it from view. Now you might ask, “What exactly this platform is for?” Well, I’m not exactly sure. But one thing I can tell you is that it looks a whole lot more believable then that big black ugly switch machine! It blends in well with the rest of the scenery and goes mostly unnoticed anyways. 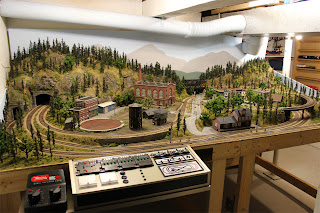 Vegetation and greenery where added next. This included adding ground cover, bushes, shrubs, and trees to the remainder if the layout and to blend separate scenes into the surrounding terrain as needed. I still have a few small places to touch up and a few foliage elements to add, such as little grass tuffs, but overall the main scenery elements are complete.

Ballasting the remainder of my track was the last major step. I didn’t have much left to ballast at this point, as I ballasted most of my track section by section over the last year. I did however have to take some extra time and precaution when ballasting all of the turnouts at the front of my layout. I had to make sure that I didn’t get any glue onto the turnout’s moving parts, so I used a fine paintbrush to apply small amounts of glue around the ties. After carefully adding the ballast, I vacuumed up the excess and ensured the turnouts moved smoothly. I finished the track by weathering it with black powder pastels.

Currently I am working on completing some nighttime lighting effects that represent a moonlit sky, which I should have complete in the next few days. I am also currently on the hunt for vehicles, figures, and other scenic details needed to complete the finer details of my layout. Street signs are also on my current to-do list.

SEE MY UPDATED POV VIEDEO OF MY LAYOUT: