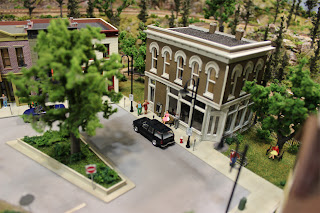 I haven’t had much opportunity to work on my layout this last month, but in the few spare moments I have had, I’ve dedicated it mostly to adding scenic details. These details include traffic signs, additional foliage, figures, and vehicles. It is amazing the amount of detail products readily available by literally hundreds of different manufacturers, and really comes down to just deciding which products to use to achieve your desired look or level of detail. 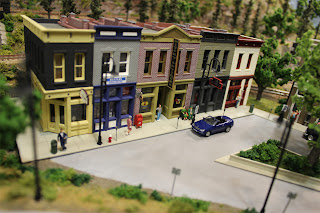 The first details I added were from a Walther’s Cornerstone City Accessory pack, which included garbage cans, pay phones, fire hydrants, bike racks, mail boxes, and parking meters. These parts require assembly and painting, which isn’t that bad as you then have free range to customize them as you please. I did this with the mail boxes by painting them red to resemble a Canadian Post mail box instead of a blue US Postal Service box. I used these parts almost exclusively in my downtown scene, but did use a few details elsewhere on my layout. 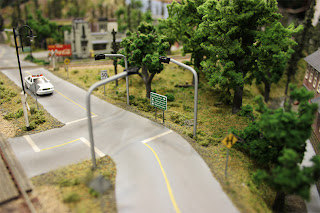 Street signs were next on the list. I couldn’t seem to find commercially-made signs that offered the type and style I was looking for, so I turned to creating my own. I found high-resolution sign images online, then used Adobe Photoshop to scale them down to a prototypical size. Most provinces/states have online traffic standard manuals posted online, which I found useful for sizing. I printed the signs out on 5×7 photo paper at Walmart, then cut each sign out and glued it to a thin sheet of styrene for extra rigidity. I trimmed the styrene right to the edge of each sign with sharp scissors, making them nice and tidy.

Styrene sign posts were glued on next, then painted an aluminum colour, along with the back of each sign. I used a dull, almost dead black sharpie to colour the edge of each sign black so it would seamlessly blend the white edge of the styrene into the black border of the sign. Using a new marker seemed to bleed into the photo paper, thus the use of the almost-dead black marker. I then glued the signs to the scenery with superglue. At the same time, I also built a billboard sign out of scrap styrene pieces and a printed Coca-Cola sign.

People figures were probably the most enjoyable details to add, as they really brought the layout and scenery to life. Most of the figures are from Woodland Scenics, and a few from Model Power. I still have neglected to give my layout an exact era, and as a result some figures seem a bit dated, while others are much more modern. Overall however, everything seems to blend together almost seamlessly. Woodland Scenics offers an amazingly large selection of detailed figures and scenes, and there are still several figures that I will be adding in the near future.

Vehicles are proving to be much more difficult to find than anticipated. Cars and trucks for the steam and transition eras are large in selection and availability, but more modern vehicles, especially North American prototypes, seem to be almost impossible to come by, are costly, and have a small selection. Model Power seems to be the most promising as far as selection, even though most of their models are European makes. Atlas had a run of North American vehicles, but I currently cannot seem to find any other than the two Ford Explorers I purchased last month. Adding more cars and trucks will most definitely be an ongoing process!

My latest detail was a small woodland Scenics tool shed die-cast kit which I installed into the turn-table yard. This small structure is highly detailed, and comes with several separate tools and details that you can use elsewhere on your layout, such as I did. Other details I added were small benches that I purchased off of eBay, as well as wooden pallets from a local hobby shop. Scrap pieces, such as left over rail and small pieces of scrap wood, all can be used as well. I added a small pile of scrap rail and lumber right behind the work shed, and used unwanted spare plastic wheels on the turn-table spurs to represent a locomotive repair area. 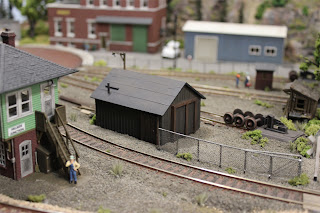 I don’t think there can ever be enough or too much detail, and that the only limitation is your imagination. Detail is what truly prevents a model from ever being entirely complete, as there is always something that can be improved upon, well at least in most cases. After 3 years of construction, the skills I have gained are significant, and there are several items and details from the beginning stages of my layout that I now want to re-model or enhance. I am sure that any future time spent on my model for the rest of its existence, will be dedicated to adding and enhancing details. Oh, and rolling stock. 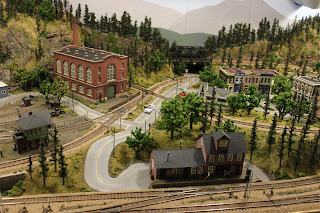 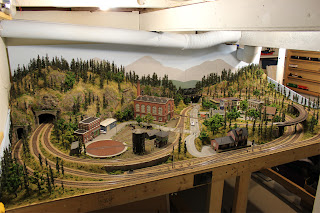