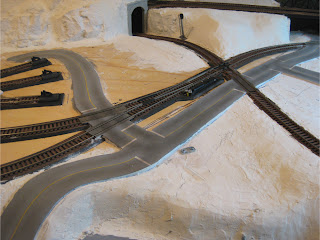 With a bit of consideration, I decided that the next step of my layout would be the roads. As always, I researched the subject online and found that the most effective method would be to build forms and pour the roads with a plaster product. First however, I needed to plan where my roads were going. I determined my road width at 2 ½”, and cut a square piece of cardstock the same width. After drawing the contour of one edge of my planned road directly on my layout, I used the template card to draw the opposite edge. This allowed me to ensure the road was always 2 ½” wide.

Once the outline of the road was drawn onto the layout, I installed 4 laser cut wood grade crossings where needed. For the road forms, I used inexpensive foam tape that I purchased from a local dollar store. Woodland Scenics sells a similar product (called Paving Tape), but it was unavailable at the one and only hobby shop in my city.

I laid the foam tape on the outside edge of the road lines I had drawn. The tape I used was  ¼” wide, which allowed it to be easily pliable for any curves. Because my layout and grade crossings were not all level, I needed to use two, three, and even 4 layers of foam tape in several areas to allow the surface level of my road to be as level as possible.  For a smooth transition between the different levels of foam tape, I always made sure the very top layer of foam tape was continuous, instead of being stepped. This is very important when it comes to smoothing the top of the road.

For the road material, I used Woodland Scenics Smooth-It, a special dry-mix plaster product specifically designed for building roads and other smooth surfaces. I mixed the Smooth-It powder with water until it was the consistency of cake mix. Working in small sections, I slowly poured the mix between the forms, spreading and leveling it with the top of the foam tape forms using a wide piece of styrene. I made sure I masked the top of the wood grade crossings with masking tape, that way I could easily level the roadway with the top of the crossings.

After the first layer of Smooth-It had dried overnight, I applied a second thin layer, smoothing over any imperfections in the first layer and making sure the road was as smooth and level as possible. Once the second layer was completely dry, I carefully removed the foam tape forms. The roads were pretty smooth, but needed further sanding to improve the surface and remove rough edges.

To sand, I used 200 grit sandpaper and sanded the road surface until I was happy with the smoothness. After I vacuumed all the dust off of the roads, I noticed some areas of my road looked more like the bubbly inside of an Aero chocolate bar then the surface of a road. This was caused from mixing my mixture of Smooth-It too thin when I poured it. If you do mix it too thin, add more Smooth-It and stir until the bubbles disappear, or let it sit for a few minutes, stirring often. To fill the air holes in the road, I simply added a thin layer of Smooth-It overtop, making sure to press it into all the holes so they didn’t reappear once I sanded the affected area again.

I used a gray acrylic paint for the road colour, of which I applied 3 coats. I also coloured the wood grade crossings at this point with India ink diluted with water. Once the gray paint had dried, I marked the center line of the roads with a pencil, using the center line on the same cardstock template I used before to measure the road widths.  These lines would be a guide for the center line markings. I also marked out stop lines using the same method. 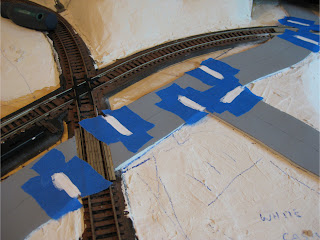 I masked the stop lines first, and then painted them with white acrylic paint. Once they were completely dry, I started to mask the center lines. To do this, I took blue painters tape and applied the required length to a piece of glass. I then cut the straight edge of the tape about 1/8” wide to make long, narrow strips. I peeled the narrow strips off the glass, and very carefully applied it to the road, following the contour of the center line I previously marked and making sure the straight edge of the tape was facing to the inside. 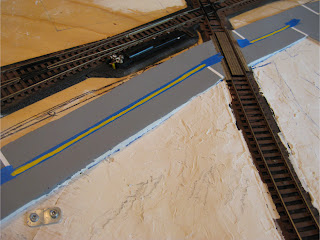 I found that starting at one end of the road and only sticking down ¼ – ½” of the masking tape strip at a time worked best for getting smooth, straight lines. For curves, especially tight ones, I found that by holding the tape down with my one thumb, and positioning the next ¼” of masking tape with my other hand and then applying it by slowly sliding my thumb forward resulted in the best curves. I then did the same with the second strip of masking tape, ensuring the space between the two strips was as equally spaced as possible.

The lines were then painted with yellow acrylic paint, of which I applied about 3 coats. I then carefully removed the blue masking tape strips. Some small patches of the gray base coat did lift with the tape, but this was easy enough to touch up (just make sure you save some of your original road colour!). I found working in sections and not leaving the tape any longer than 20 minutes on the road greatly reduced the amount of paint that came up. Also removing the tape on a sharp angle helped, opposed to lifting in straight up.

My roads were now complete, but looked a little too perfect and new. To add some weathering and usage effects, I sprinkled a very small amount of black pastel dust down the center of each lane and smeared it with my finger. I used the same effect on the grade crossings as well. Signage and other small details will come later, but at least the main roadways are now complete and ready to serve the various areas of my layout.