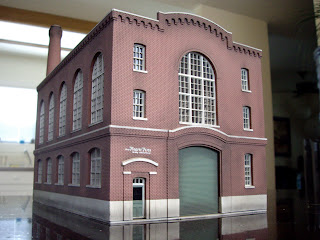 One of the last and largest structures for my layout is a Walthers Cornerstone Northern Light & Power kit that I recently purchased at my local hobby dealer. I knew before I purchase the kit that I wasn’t going to keep it as a power plant, but the size of the building and its large, round-top windows were definitely selling features. My plan for the building is to place it in the vacant space between the track leading into the right lower mountain tunnel portal, and the road passing around the turn-table area. The building houses the Pioneer Press Daily Advertiser as its tenant, complete with a custom built interior and printing press. I chose the Pioneer Press Daily Advertiser because I’ve always had an interest in printing and journalism, and because I already had the company name on a Woodland Scenics dry-transfer sheet.

Like all Walthers Cornerstone kits, all pieces are precision molded with quality materials. Besides the 4 walls, roof, one-piece chimney, and base pieces, the kit includes an under-track hopper kit, roof support trusses, an internal firewall, roof vents, and the separate windows and doors. The separate windows and doors are my personal favorite, as they make painting much easier and convenient as there is much less masking required. Before I started painting and assembling, I carefully cut each piece off of its plastic carrier structure and trimmed/sanded off any spurs, and washed each piece in warm, soapy water. 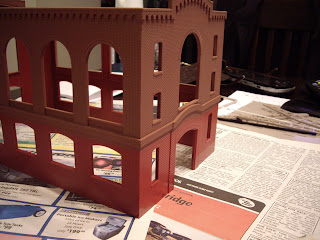 I started by carefully assembling the 4 main walls, ensuring the structure was kept level and the walls joined at a perfect 90 degrees.  I then painted the main structure with brick red Humbrol enamel, thinned 3:1 with thinner. I also used the same paint colour on the chimney and firewall pieces. At the same time, I also sprayed the windows and doors with Testors light aircraft gray. I didn’t remove the windows at this point from their carrier, making them much easier to paint in one easy step. Other small components, such as the roof vents and trusses, were painted with metallic aluminum paint.

After the main structure dried for 24 hours, I masked the entire building to prepare for painting the trim and foundation. I used the same light aircraft grey colour that I used on the windows for the trim, which took about 3 coats as I was brush-painting them. Once the trim had completely dried, I made any necessary touchups with either the brick red or light aircraft grey paint using a fine detailing brush. I then weathered the entire building with powdered pastels and sealed it with 2 coats of Testors Dull-Coat.

I felt that the roof pieces lacked any detail, so I used trip styrene to add a bit of this lacking detail. I first divided each roof panel into 4 equal sections by gluing 1mm x 1.5mm strip styrene directly onto the roof. I then glued a piece of the strip styrene along the total length of the edge of one roof section. I made sure this piece overhung the roof panel slightly, thus covering the gap between the 2 roof sections once they were assembled on the structure. The entire roof was then spray painted flat black.

For the large double door, side entry door, and overhead bay door, I used dark green enamel to add a bit more interest to the colour scheme of the building. I masked off the door frames and transoms so they would remain the light grey colour I had originally coloured them. The last step was to weather the doors with dark powdered pastels and seal with a final coat of dull-coat. The windows were also weathered and sealed with the same method.

The clear styrene window glazing included with the kit is less than satisfactory. The glazing is thick and oddly obscured, so I opt to use clear styrene from Evergreen, which is thin and almost perfectly clear, looking much more like real glass. After removing each window from its carrier, I carefully glued it to a clean sheet of the clear Evergreen styrene. I glued each window side by side to get as much use out of the styrene sheet as possible, leaving only a large enough gap between each window to accommodate a razor-blade. After the glue had dried, I carefully cut each window with a sharp hobby blade, and trimmed off any overhanging styrene where needed. This process went much quicker than anticipated, and before I knew it, I had a nice pile of glazed windows ready for installation. 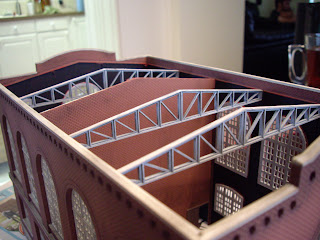 Before installing the windows, I first painted the interior walls with dark grey enamel. I also scraped the paint off of the surfaces of the windows and window openings where glue would be applied for a stronger bond. I then applied a small bead of glue around each window, and mounted it to the inside of each opening, pressing down for several seconds to ensure it was properly seated. Once the windows were all installed, I added the 3 roof support trusses and the firewall section.

Lighting was next. I didn’t use the styrene light diffuser box I had used in previous models, mainly due to the fact that this building’s interior is completely open and visible due to the large amount of windows. I instead wired 2 automotive 12v bulbs between the roof support trusses, using rigid steel wire to support each bulb. I originally wired the bulbs in series, but they were too dim at 12 volts, so I adjusted the wiring to a parallel circuit, allowing the bulbs to glow much brighter at the same voltage. The wire leads run down the back wall and exit out of 2 small holes in the structure’s foundation. 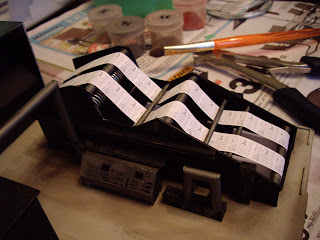 The interior was by far the most challenging task of the whole project. I knew the staple piece of equipment for any press company is the printing press itself, so I immediately went to work scratch building a large press from scrap styrene. Once the press started to look somewhat realistic, I sprayed it flat black, and detailed it with metallic aluminum rollers and highlights. The final and most imperative detail was the print itself, which I created in Photoshop and printed as a long strip on standard printer paper. I then glued 2 printed strips directly to the press, weaving it in between the rollers. 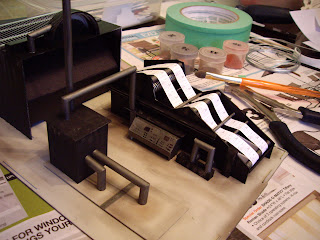 For the rest of the interior, well, it was pretty much just random pieces, shapes, and parts thrown together in an attempt to make the inside look like something industrial and factory-like. The large box-like structure with the grate on top, sits behind the interior firewall and really only serves to fill the large interior void. Its intended purpose is completely up to the imagination! Just remember, the interior will be mostly out of view from the outside but getting just a glimpse of any interior parts when looking at the building makes it entirely more realistic and believable to the viewer.

Finishing the roof was next, which included installing the painted roof vents, followed by weathering. My first attempt at weathering was with my preferred method of powdered pastels. I spend about 45 minutes carefully applying the light grey powder with a soft brush, but when I added the dull-coat to seal it, the light coloured pastels almost completely dissolved, leaving me with barely-noticeable weathering effects! I instead opted for dry-brushing the roof with steel enamel paint.  Once dry, I glued both roof sections to the main structure.

This kit was undeniably a lot of fun to build. It is currently the largest structure I have ever put together, and only took me one and a half weeks to complete, working for a couple hours each evening. I might still be able to fit one or two very small structures on my layout, but definitely nothing as large as this one. I must say that the feeling is almost bittersweet that this kit is finished. Guess I will just one day need a much larger layout. 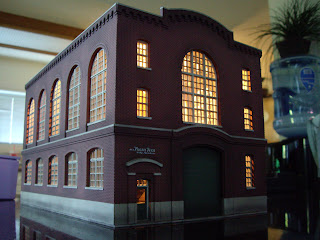 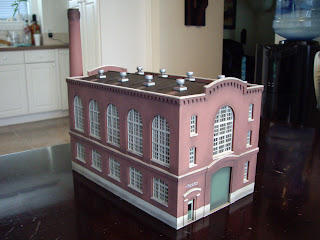